Eye in the Sky Movie Review 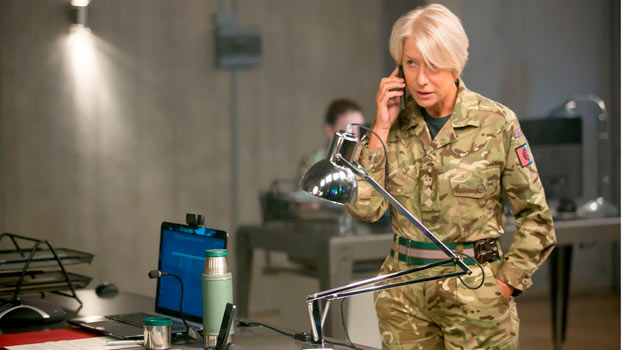 Through the development of modern technology, war as we have come to know it has drastically changed. Director Guy Hibbert presents a world where satellite images and drone machinery have made face-to-face combat unnecessary in the identification and assassination of targets. Eye in the Sky is an examination of drone morality, as the legal and moral implications of allowing for collateral damage in this brave new world become disturbing.

In Kenya, a group of terrorists have been located by Kenyan agents and tracking them in England is Colonel Katherine Powell (Helen Mirren) and her team. After planting a bug inside the house of the terrorists, they identify the terrorists as East Africa’s #2, #4 and #5 most wanted. Powell’s original mission to identify and capture the terrorists becomes moot as they watch the terrorists gear up for a likely suicide bombing.

Colonel Powell immediately asks Lt. Colonel Frank Benson (Alan Rickman) for the affirmative to destroy the targets. Once given the all clear by his political advisors, Colonel Benson orders Air Force Lieutenant Steve Watts (Aaron Paul) to take out the terrorists with a drone. Just before he detonates, a Kenyan girl named Alia (Aisha Takow) begins setting up a bread stall, just outside the home of the terrorists. Watts refuses to shoot, and with time running out, the film opens its deeply disturbing question:

Is one certain death better than 100 probable ones?

On paper, it’s probably a pretty simple answer. There’s an interesting moment in the film when the foreign affairs minister receives a call about the situation while playing in a ping pong tournament, completely removed from the images we are witnessing. He questions why they even wasted their time calling him and instantly orders the hellfire. But the film orchestrates an attachment between viewers and Alia, and sending her to her death isn’t quite so easy anymore. Completely removed from the situation – it’s simple. Being the one who pulls the trigger – not so much.

The images of the terrorists gearing up for war are unnerving, but where the true importance lies in the mission is in its portrayal collateral damage. It challenges your perceptions for the ‘good’ in a legal, political, emotional and ethical manner all in a day’s work. Guy Hibbert’s script lets no one off the hook easy. For the philosophically inclined, it’s a modern and relevant spin on the trolley problem: do you allow fate to run its course and let many die, or intervene to save the masses, but have total responsibility for the death of one?

All the fear and desperation is generated by the actors, and Aaron Paul and the late Alan Rickman in particular were superb in channeling their character’s anxiety. Another worthy mention is Barkhad Abdi, an undercover Kenyan agent who guides the bug into the house from only 20 yards away.

The only semi-disappointment I had was that it goes too quickly! The hour and forty minutes just flew by and it was hard to believe it was already over. The suspense is there from early on, and it’s what speeds the movie right through to the end.

Eye in the Sky leaves you with questions you’ll likely forever be unsure about. But then again, when are there ever any simple answers in war?