It’s the restaurant that reinvented vegan cuisine, made dining for vegans inclusive and proved the vegan sceptics wrong. While Au Lac Vegan Cuisine has been around for over 10 years at their Dickson location, Owner and Chef Can Hoc Lieu still gets a kick from the looks of utter disbelief from customers who try their soy meat products.

It is not uncommon for Chef Can to be called over to a table and made to confirm that the food he has served is in fact vegan. He prides himself on spending many hours out of the kitchen researching how to create new vegan dishes without compromising quality. He has a very thorough testing method to introducing new items on the menu. It all starts with his staff, if his food passes that first test it’s then taken home to face the harsh criticism of his children. If he gets the green light, he ensures his meal is still tasty a day later for lunch as leftovers (which is why the serving sizes are so generous!).

Currently, the Lieu family are getting excited as Au Lac Woden’s first birthday approaches. As of this weekend, it has been a year since the family extended their vegan branch into the south-side of Canberra. They want to use this milestone to celebrate their loyal customers following by offering 15 percent off on Saturday 15 & Sunday 16 September for anyone dining in at their Woden and Dickson venues.

We went and tried a handful of flavoursome dishes ahead of the birthday bash to make your dining decision a little easier! The Combination of Tofu, Soy Meat & Noodles Stir Fry is both hearty and juicy. From the Asian green variety to the combination of vegetables and soy meat, this dish has plenty to offer. Underneath the generous toppings, you’ll also find pan-fried flat rice noodles to help mop-up all the delicious house made special sauce.

Be sure to have a serve of the Lemongrass Soy Fish to crunch on. Minced lemongrass & chillies are wok tossed with onion and capsicum to give a crispy coat on the soy tofu dish which replicates a flathead. The dish is served with a complimenting sprinkle of chilli salt. My personal favourite was the Soy Duck Red Curry with Lychees. This standout dish encompasses all my favourite things including melt-in-your-mouth eggplant, capsicum with a crunch and a sweet kick from lychee fruit to cut through the red curry. This curry is served mild but can be altered for those wishing to take on the heat. One of the things you’ll love about Au Lac is all the colours that come fresh to your table (you’ll want to Instagram it). This includes the Steamed Berry Rice, made from a vibrant purple rice-berry. This rare type of rice is hard to come across because it is the product of three rice varieties cloned together and grown into this improved form. Compared to white rice, it is low in sugar, has three times more iron and is richer in fibres. Most importantly, it pairs seamlessly with the curry because of its improved texture, aroma and increased flavour. Chef Can pointed out that in the South of Vietnam, non-spicy food is on the rise. He recommends his crispy Southern BBQ Soy Pork topped with crushed peanuts for those looking to steer away from a little spice. As we come into Spring, the Rice Vermicelli Salad with BBQ Soy Meat is the talk of the town. This salad is filling, fresh and promises crunch! A house special sauce is served on top ready to pour and dig in.

One of the fundamentals Au Lac lives by is to ensure they give customers a dining experience where nothing is off limits. Their efforts to be inclusive have not gone unnoticed, managing to replicate the flavours and textures of meat that no one ever thought was possible. Au Lac has even reworked the classic Vietnamese Iced Coffee; typically made with condensed milk, Au Lac use soy-ice cream and coconut condensed milk as a vegan replacement.

Last but not least, we couldn’t forget to mention the eye-catching drinks menu. Showcasing all the colours of the rainbow through their house made Roseberry Tea and Lemon Lime & Bitters. Each drink is finished with a sprinkle of love that is out of the ordinary. The Mango Smoothie has a hit of cardamom while the Watermelon Juice has a pinch of chilli powder.  These well-presented and delicious juices are another example of Au Lac’s commitment to fresh, quality ingredients.

With Floriade just around the corner Au Lac is getting their lunch combo ready which includes a selected spring main, drink and dessert. Don’t forget to head in for Au Lac Woden’s first birthday for 15 percent off on Saturday 15 & Sunday 16 September. 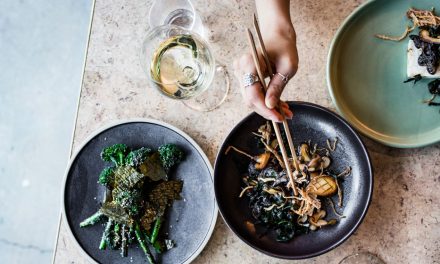