An evening by the water with Kate Miller-Heidke

Kate Miller-Heidke, who is recognised by many as Australia’s pop opera treasure, took her soaring vocals to the National Museum of Australia earlier this month.

Miller-Heidke is an artist who has released four studio albums in Australia, topped the charts numerous times, reached multi-platinum status for her hit singles, and brought the critically acclaimed musicals The Rabbits and Muriel’s Wedding to life on stage.

The evening began with an opening performance by Sydney-based singer and songwriter Odette. Influenced by African funk and jazz, the 20-year-old mesmerized the audience with her poetic spoken-word verses, soulful vocals and piano notes that were perfectly compatible with the sound of rain that began to fall. It’s the perfect contrast to what was to come.

As the afterglow of the sunset burned into darkness, Miller-Heidke took the stage with her stunning gold crown and a purple tiered-gown. Her musical blend of opera, folk, and alternative pop meant that everyone was bound to stumble across something out of the ordinary.

Miller-Heidke’s concert had it all; from piercing soprano notes to sensational guitar solos and looping pedals by her husband, Kier Nuttall, as well as a string quartet for the added dramatic touch.

As Miller-Heidke explained onstage, her music strives to be ‘empowering, challenging, and meaningful’ for everyone. This statement definitely holds true with songs like Caught in the Crowd, a tale of a child bystander to bullying that has been played in schools all over Australia, and The Rabbits, which transcends into a dimension of Australian history.

Miller-Heidke also played a beautiful rendition of Amazing from the musical Muriel’s Wedding, as well as big hits like Don’t Underestimate Me Dude and Last Day on Earth, which the audience instantly recognised the moment the first notes were played. Her quirky personality and humour was also much loved by the audience, such as when she questioned the existence of politicians at her concert before diving into the song she dedicated to Canberra: Politics in Space.

Everyone would agree that the rain did little to dampen the spirits of those in attendance. Ending on a high note (in a very literal manner), Kate Miller-Heidke’s musical talents and colour could certainly be felt throughout the length and breadth of Canberra. 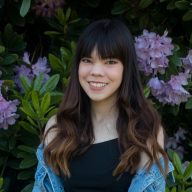 Tracy Beattie is an ANU student and columnist at OutinCanberra who spends just as much time taking photos of her food as she does eating it. When she’s not at law school frantically writing essays, you can find her drinking matcha lattes at cafes, dancing to Korean pop or travelling her way around Asia. Find her on Instagram @tracytracy_