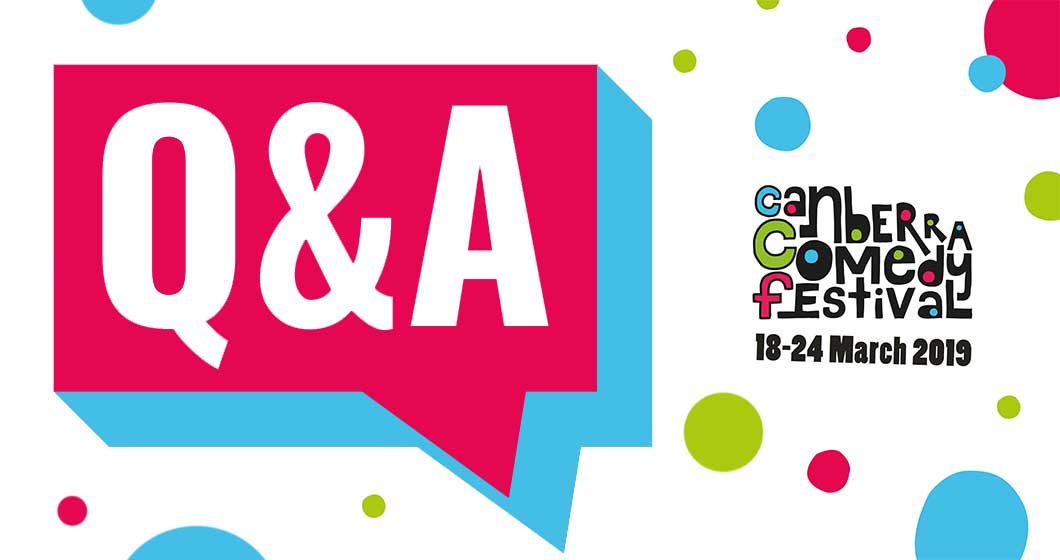 Canberra Comedy Festival has kicked off, we chatted with a few comedians before they touched town in Canberra.

[WARNING] This Q&A is carried out with unapologetic comedians and some content has been removed and other answers may be found offensive.

At what age did you first perform?

Neel Kolhatkar: 15
Ciaran Lyons: 14 and 11 months.  I was that young, I’m still using months! My parents had to sign me into the venue, only to find out once I was on stage all the jokes were about them!
Fern Brady: I think when I was 8 and I used to write my own love songs and perform them in bars on holiday in Lanzarote while my parents cruelly laughed at me. I also did a great eulogy at my granda’s funeral when I was 19 and the feedback was so positive that was what made me get into comedy. This also gives you an insight into my stage presence. Funereal.
John Hastings: I wandered on stage at 4 and was quickly handed back to my parents.
Nazeem Hussain: 22
Paul Foot: I first performed at 21 years old. But I had never seen stand-up comedy before, ever, so I didn’t realise that I was supposed to prepare material. I just went up there and asked people what their favourite fruit was. It seemed to work, though. And that was the day I decided to be a comedian forever.
John Safran: I performed Thriller at a school concert in Grade 5 (So age 11-ish). Cut a yellow ping pong ball in half, applied some texta, and stuck them in my sockets for the werwolf eyes.

Which comedians inspire you?

How often do you freestyle on stage VS stick to the rehearsed script?
Neel Kolhatkar: 10% freestyle 90% script.
Ciaran Lyons: Very much depends on the gig! I like to mix in between the two to keep it fresh! But can always lead more to the freestyle side, if someone in the crowd thinks they are funnier than the comedian on stage haha!
Fern Brady: If I like the audience and am enjoying the show I’ll add in new bits, if it’s going badly, I’ll recite it like a dead behind the eyes court jester.
John Hastings: It’s a tightly scripted experience. It’s like Shakespeare but so much more intelligent.
Nazeem Hussain: It’s about 30/70, freestyle v script.
Paul Foot: It totally depends on the situation. I do both a lot. My tour shows are carefully and meticulously scripted, but, as a comedian, it is very important to be able to improvise when the moment arises. So to make sure I am always able to do this, every few months I do a Secret Show in London for my Connoisseurs there. The show is 2.83 hours long and is totally improvised. It keeps the improvising muscle strong! A kangaroo doesn’t have to practice jumping, does it? It’s a top-quality jumper because it jumps regularly. A comedian must have the same approach to improvising. I jump high!
John Safran: Only freestyle when the technical equipment doesn’t work and I have to cover until it’s fixed. The audience seems to like it when it’s a disaster I have to dig my way out of. Sadists.

Who is the funniest non-comedian in your family?

Neel Kolhatkar: Dad.
Ciaran Lyons: It’s a tie between my Mum and Dad.  If I said anyone else, I wouldn’t be getting free accommodation when I go back to Perth anymore.
Fern Brady: Probably my dad as he’s incredibly blunt in his advice to me. When I told him I wasn’t getting TV work he told me cheerfully to “get bulimia”, when someone was trolling me online Dad said “he’ll probably find you and murder you” and now that I am getting work if I complain about anything he wearily says “Well, that’s showbusiness” even though he works in a truck garage and has precisely zero experience of showbusiness.
John Hastings: I have no idea. They are all laugh. I am laughing more now at everything because I am trying to angle for a bigger split of the inheritance pie.
Nazeem Hussain: My younger sister. She’s the funny one in the family and doesn’t even have to try. I hate her.
Paul Foot: My father was a very funny man. I say was, not because he is dead. He isn’t dead, he just isn’t funny anymore.
John Safran: Dad. He was an accountant and he used to produce the staff magazine back in the 1980s. He’d photocopy comic strips featuring office situations from my Mad magazines, then liquid paper over the names in the speech bubbles and replace them with the names of people in his office.

In the current online outrage culture, where do you see comedy going in the future?
Neel Kolhatkar: Polarised like everything else. There will be comedy that just plays to what people want to hear and each sub-culture will get more and more extreme.
Fern Brady: More and more in my favour as the embittered old men die off like dinosaurs and women and queers and brown people take over.
John Hastings: I dunno. How is outrage culture different than any other time. People get worried about words and then get a job and stop caring then someone else is unemployed and the cycle continues.
Nazeem Hussain: Comedy is most useful, and most exciting when people have the most trouble talking about life outside of comedy rooms. So, it’s a great time to do comedy right now.
Paul Foot: I don’t know where comedy is going in the future. It doesn’t interest me really. I just make comedy that is funny to me. You can’t avoid saying something that is offensive to someone somewhere, so you just have to take the risk, and know that you can defend what you say if confronted. For example, if I were to write a piece of comedy about a murder mystery in which an old, rich lord was killed by his illegitimate son, who he made be a gardener and work in a tragic greenhouse, some vegetable enthusiast would, no doubt, say I was bringing soil-based vocations into disrepute. You can’t please every tomato nutter baybayyyy!
John Safran: It’ll all work out fine. It already has. You read those Forbes richest comedian/highest ticket sales lists and it’s full of all those comedians, like Kevin Hart, who have supposedly been cancelled. I beginning to suspect twitter isn’t the real world.

Every comedian has a story of their first bombing, what is yours?

Neel Kolhatkar: At 15 I performed at a talent show next to a church. I had to follow a 3yr old girl playing the flute. I tried edgy religious jokes. It did not go down well.
Ciaran Lyons: My second gig. My first gig went awesome (for a first gig, still not going to use the footage to get me booked haha!).  I went into the second gig there was about 20 business men in there.  They didn’t really find my jokes about going to school and getting my lunch money stolen that hilarious!  It was just silence for 3 minutes.  My Dad was still at the back recording.   That was a silent car ride home.
Fern Brady: I don’t know why my first bombing would be special. To be honest, I have a kind of PTSD at this stage from the number of times people have got up to fight me on stage or chased me out their village or said I’ve upset the Mayor of Newham (that was only last week.) One time I was bombing so bad that I tried to kill
the stag party in the audience by tipping a giant stage light onto them and thankfully the MC grabbed it just as it was about to crush their thick empty heads. Sometimes I think I’ll flash back over these when I die but for the most part, I suppress these memories in order to continue gigging.
John Hastings: I don’t know. I bomb a lot. We all have had days at work that are dog dick bad. They don’t stick out.
Nazeem Hussain: Edinburgh. Late N Live. One minute in, a Scottish woman stood up and yelled ‘oh just tell us a joke would ya!’ Then another guy stood up and shouted ‘JUST BE FOO-NEH!’ I got boo’d off the stage and insisted that my friend give me his jacket and hat so I could disguise myself on the walk (run) home because I genuinely felt like the audience would still want to get me after the show.
John Safran: Don’t do much live work. So I have to invest a year or so in a book or tv show then find out it’s bombed. No one remembers I was part of a Channel 7 show called Late Report that no one remembers and was axed quickly. In fact I can’t remember if it was called Late Report or Late some other word.

When was the first time you got drunk, did your jokes improve or worsen?

Neel Kolhatkar: Worsen. 2-3 drinks is the sweet spot but any more and I just go rogue.
Ciaran Lyons: When I turned 18, my parents were like Ciaran you’re 18 now! we want to see the first time you get drunk! So I just pulled out a video of when I was 13. I have a couple of ‘drunk at the nightclub stories’ in my set for sure.  Don’t know if it improved my jokes getting drunk, it has definitely given me more to talk about on stage though, so Cheers!
John Safran: People only find me funny if I’m sober. I guess they think anyone can streak through Jerusalem or get nailed to a crucifix if they’re drunk. It’s only impressive if you do it while sober.