The hashtag that made drinking alone cool Last week it was distressing to see tabloids across the country run a story about former Test Captain, Steve Smith, drinking alone in a New York Bar. It says more about this day and age that someone would rather pull out their phone and take a photo, than pull up a chair and have a beverage with a former Australian Test Captain.

This incident made me think of all the places I have had a beer alone in Canberra since my wife went overseas. In solidarity with Steve, share a photo of yourselves having a bevy alone at one of Canberra’s bars with the hashtag #WithSteve.

My hope is that surely Canberrans would be kind enough to pull up a chair and have a beer with Steve if he ever showed up at somewhere like the QT Skylounge.

Speaking of fancy, we’re currently in the middle of the annual Truffle Festival here in Canberra. Having previously viewed truffle as a ‘rich person’s food’, I decided to put my assumptions to the side and try a new hidden secret at Majura Park.

In early June, Funguys Truffle Burgers opened up just outside the Majura Park Truffle Farm. For those in the know of Canberra’s food scene, the venture is the brainchild of Damian Brabender, Executive Chef at Otis Dining Hall, and Jayson Mesman, from Mount Majura’s The Truffle Farm.

The menu is simple, but what did you expect when the food is cooked in a 12-metre shipping container?

As someone that loves garlic aioli on their burgers, the truffle butter and truffle mayo added another dimension to a meat pattie cooked on a fire from hazelnut tree branches.

When combined with loaded fries that paired the truffle mayo with parmesan cheese, my overall first experience with truffle was a positive one.

My hot tip for visiting the Funguys when they are open Friday-Sunday would be to get in early as they were closing mid-afternoon when I went.

There is also whispers that they will change up the menu to suit an audience outside the Truffle Festival. But until then I’m just going to enjoy my Trufflesaurus Rex Burger. 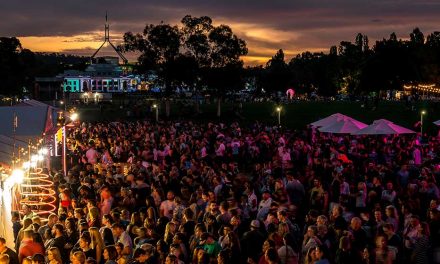