Duck Duck Ghost on the rise OutInCanberra’s Jack Gruber chats to local Canberra band, Duck Duck Ghost, to get an insight into what its like being an up-and-coming band in the nation’s capital.

I have seen about 10 shows that Duck Duck Ghost have played – some with 15 people watching and others with 200, and no matter the crowd or situation the band puts 100 per cent into every show.

Listening to a song through your head phones as you’re scrolling down your Facebook timeline has no comparison to the feeling, energy and emotion you get while listening to a band sweat it out on stage. Live music is like a whole other world, so I wanted to ask my good mates, the guys of Duck Duck Ghost, a few questions of what they think about the live music scene in Canberra.

How long have you guys been playing together?

The five of us been playing together since mid-2014, so about two years now. Our first gig was the local heat of the National Campus Band Competition that year. We received some good feedback from the judges, even though one of them said our music was “too complicated” and that we had a “dumb name”. I remember about 15 minutes before we were meant to play I got a text from Alex saying that he wouldn’t be able to make it. I was trying to figure out a way to tell the other guys but it turned out that he was just joking around. As if first gigs aren’t stressful enough!

What is it like being an up-and-coming band playing in Canberra?

Well, basically it means we need to do a lot of shows elsewhere and build a fan base in other states. We’re planning on doing a few small tours later in the year to go as far as Brisbane to see how things go. Hopefully next year we’ll have some pretty exciting tour news to announce.

What do you think of Canberra’s live music scene?

Canberra’s music scene can be quite a tough one to work with. There are always opportunities to play, but playing the same gigs too often can be a trap. I think from an audience’s perspective Canberra has great bands and artists, but when a band is playing three gigs a month you can’t really get excited about seeing them. It’s like if you miss seeing the band this week you can just catch them next week, or the week after. We’ve played to big crowds and smaller ones and had a good time doing both.

What bars or venues do you love playing at in Canberra?

Transit and Phoenix are Canberra institutions; we can’t go past them. We always try to think outside the box when it comes to where we gig, there’s a lot of potential out there in places you wouldn’t normally expect to see bands.

What do you think is missing from Canberra’s live music scene?

More bands! Can everyone reading this please start a band? That’d be great. A population increase of a couple hundred thousand would be alright too I guess. Nah, for it’s size Canberra definitely punches above its weight. We could do with another medium to large-sized room though. We used to have Maggies in the city but there’s a noticeable gap there now. It can be tough to get out to venues like Polish Club and The Basement without a decent public transport system.

Who are some of your favourite local acts?

I’m really into Moaning Lisa at the moment. They’re one of the best things about Canberra right now, period. Also if you haven’t seen Capes you can’t really call yourself a Canberran. We’re big fans of Lost Coast as well.

Most memorable gig so far?

Watching Cohen and Alex get up on stage with British India when we supported them last year was pretty memorable to say the least. My favourite was our EP launch though. It was a really long journey to get there. If you told me before I got into this that I’d get to play to a crowd as supportive and responsive as that, that would be a dream come true. Our goals have changed a lot since then. It turned out to be a pretty telling farewell to an amazing venue as well.

What’s next for Duck Duck Ghost?

Over the past few months we have been going back and forth to Electric Sun Studios in Sydney. We’ve been recording a few new songs. We aren’t quite sure how we will be releasing them yet but we do have a new single scheduled to come out in late August. We’ve also got a video clip idea that involves GoPros and chauffeurs so we will see how that turns out. But we’re real excited about our latest recordings. They’re shaping up to be our best work yet.

I think I’ve been to almost all of your gigs, and every time they manage to surprise and entertain me. Do you think hard about how you mix it up each gig? Or do just wing it?

We always try to mix up the set list a bit and try to not get too repetitive with the way we structure it. We usually work out a set at a rehearsal the week of the gig. That being said, we never put an immense amount of thought into it. We’ve been playing the songs a while and we’re familiar with which songs work well with each other and just try and base it around that. Other than that, I guess we’re just passionate about playing music and playing music with each other. We love playing gigs and always try to give it our best shot. 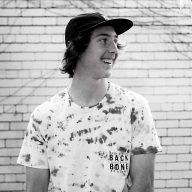 In Pictures: Molo Live In Pictures: Groovin' the Moo Canberra Duck Duck Ghost on the rise